HP-41.  Beyond calculators.  A real controller.
how I got into the HP-41cx calculator/computer

I had been quite good at the slide rule, and hardly considered calculators until after everyone else had used them for years.  I was just as fast and got the 3-4 digit accuracy I needed in my electronics work while improving my understanding of number relations by using the slide rule—so why change?

Then I started needing programmability.  The slide rule had to go.  I collected loads of information on programmable calculators.  While I drooled over the HP's, it eventually came down to cost, and I got the TI-58c in 1981.  It was fantastic at the time, although I still needed lots more memory.  A couple of years later I managed to trade the 58c plus $100 for a hardly-used TI-59 and printer, three additional library modules, extra magnetic cards, and some applications books.  Wow!

The next problem I ran into was that the TI's could not control any equipment or take data automatically.  Essentially the only I/O was the keyboard, display, and printer.  It really was a calculator, not a hand-held computer like my friend's HP-41cv.  Now I had more reason to be interested.

In 1986 I got the first four items below, and later the rest:

Wow what a fun and useful little machine!!  These all still work, except for the Thinkjet printer.  (Instead of using the HPIL printers now though, I go through one of the interface adapters above and print on my Epson or Star dot-matrix impact printers.)  Another module ROM image candidate to put in the Clonix-D hardware module is the Sandmath module with gobs of math extensions for the HP-41, and the plotter module; but my 41's memory map doesn't have enough room left.  Many of the modules above have their own keyboard overlays which I also have.  For more exciting future possible modules (including microSD card!), see this post. My Catalog 2 now looks like this on the monitor (fed by the HP92198 HP-IL 80-column video interface): 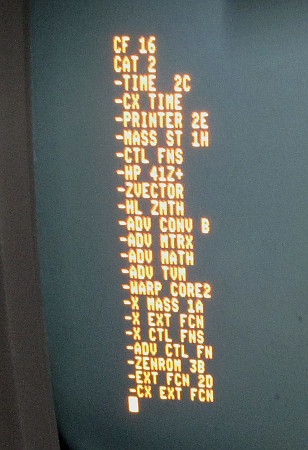 (Library 4 is there also but does not show in the catalog listing, as it is only for internal support for other modules.)

Right away (in 1986) I started using it with the HP82169A IEEE-488 interface to connect to equipment on the workbench at work to automate the repetitive jobs of taking certain readings through the DMM, and controlling programmable signal generators, relay boxes, power supplies, and so on.  In small but quick steps, the company I was working for got into a product line that required a lot of testing which was totally impractical to do by hand.  Not realizing how quickly this situation was going to escalate, I set up automated testing, using my HP-41 as the controller.  Especially back then in the late 80's, people would be absolutely stunned to see a large rack of instrumentation controlled by something that would fit in a pocket.  It gradually got to where I didn't get to use my HP-41 much anymore.  Production test operators were using it all day to test our product.  In fact, the first two million dollars' worth were tested by this HP-41cx and a 20-page program.

In the meantime, I got the HP-71B plus 2000 pages of documentation and a similar complement of accessories (including an extra 160KB of RAM).  It was far more powerful and more satisfying in certain ways, but not as fun as my beloved little HP-41.

Eventually we transferred the control of the production testing to a 68000-based HP series 9000 computer.  Interestingly, it was not even twice as fast as the HP-41, because much of the time was spent giving filters time to settle and waiting for readings to come back from the equipment.

Now I still use the 41cx every day—not much as a controller anymore, but as a calculator, timer, alarm clock, a daytimer that reminds me of upcoming appointments upon turn-on, calendar, tracker for how much time I spend working on different accounts for my clients, and occasional notepad and phone directory.  (The slowness of its text editor limits the scope of the last two.)  As you might have figured out already, I don't use (or have, or want) a smartphone.

I don't really have any use for a modern graphing calculator.  For my original purpose in getting the 41, the newer models have not been suitable HP-41 replacements at all.  They are what I call "supercalculators" (all one word), and not hand-held computers that can be used as controllers.  They're just small consumer appliances.  I want the interfaceability to lots of workbench instruments at once, without going through a PC.  The workbench is always too messy to depend on communication with IR beams.  Things are always in the way.  And USB and Bluetooth have their own set of problems.  HP-IL was much better.

I have learned much from the 41 that I have applied in various designs in my work, regarding things like RAM file systems, the interface loop concept of communicating among instruments, and making a system flexible, expandable, and customizable.  The same goes for the 71 on an even much greater scale.  Unfortunately, HP is no longer the company it used to be, and they've lost my loyalty.  That doesn't have to be true of the interest groups though.

I originally posted this on the HP museum website's "memories forum," but have been unable to edit it for updates for years now, so I put it here on my own website.

My HP-41 links are at the bottom of the links page, at http://wilsonminesco.com/links.html#hp41.